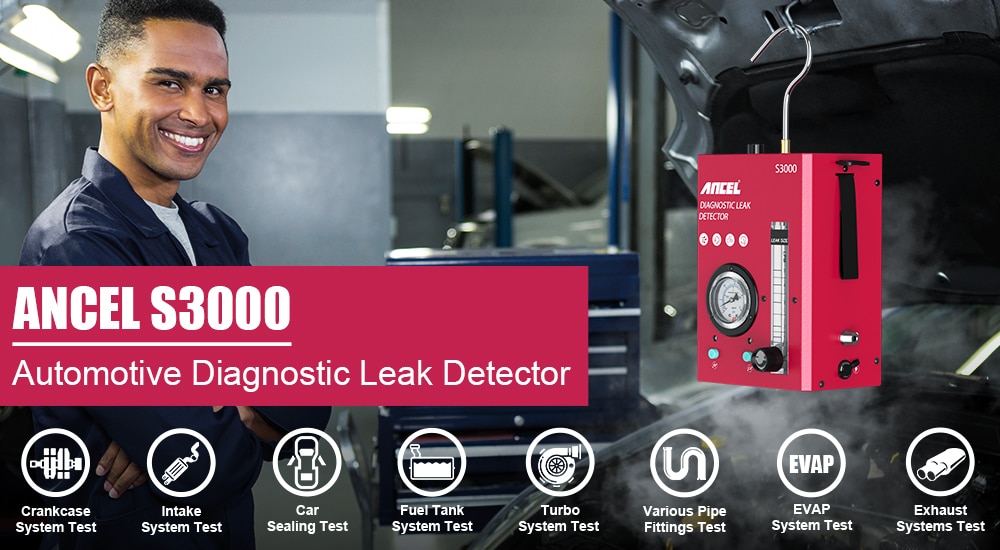 [Safe for all vehicles] ANCEL automotive smoke machine leak detector is made of thick solid metal, compact and durable.

smoke machine heats up the baby oil or mineral oil to produce smoke vapor. This vapor does not have any toxic particles which could cause harm to the body. It’s entirely safe for all vehicles.

[Ideal for checking all types of leaks] ANCEL S3000 evap smoke machine comes with various tapered smoke injection nozzles, which can fit in almost all lines and hoses and an detect even the smallest leaks. You can test connectors, seals, gaskets, worn rubber, exhaust or cooling systems, intake manifolds, low-pressure Turbo leaks, vacuum leaks, and EVAP systems. Therefore, It’s perfect for checking all types of leaks.

[Save you time and money ] A vehicle may run into a problem at any moment and anywhere. ANCEL S3000 automotive smoke machine will make it easy for you to detect both vacuum and EVAP leaks. Get S3000 car smoke machine and solve the problem by yourself, You’ll save time and money and learn a new skill.

【Overheat & Anti-frost Protection】This smoke detector has an intelligent protector, if it exceeds the working limit, such as over 75 ℃, it will automatically turn off the power to secure the safety of both the operator and device 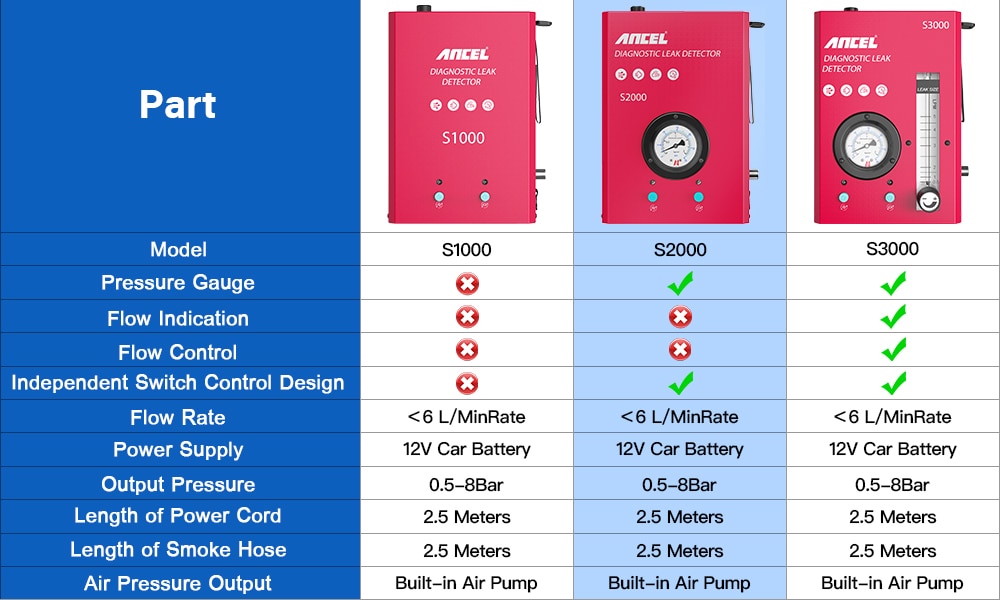 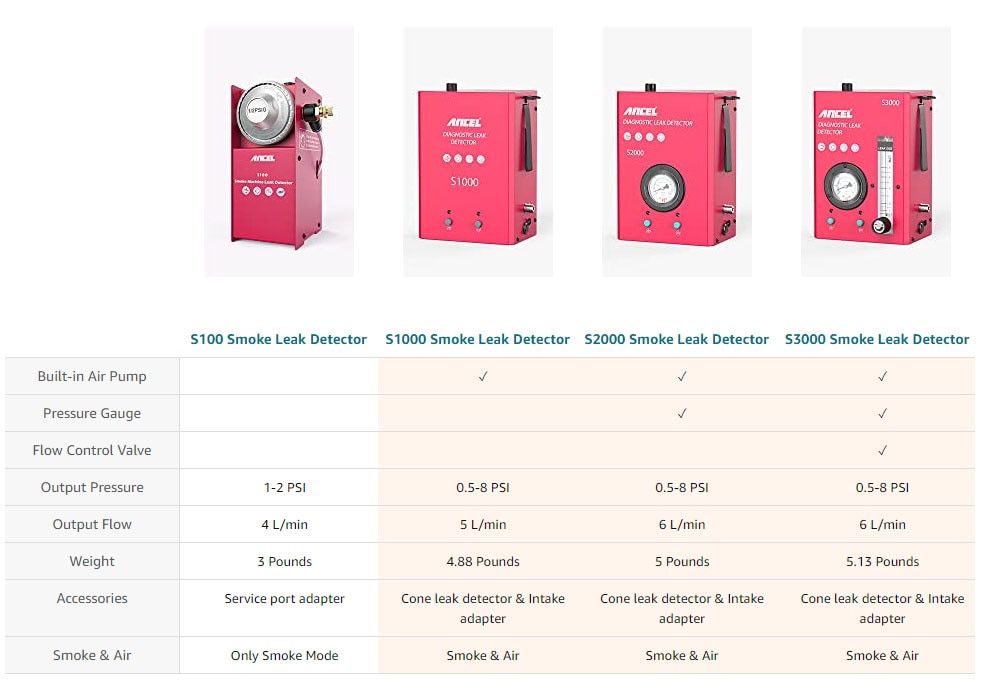 How to do leakage test？

1. Turn OFF the ignition of the vehicle.

LEAK TEST OF VEHICLE SYSTEMS REQUIRES THE ENGINE TO BE OFF

2.Dismantle the air filter and the throttle connections.

3.Clean the inner wall of the intake opening to avoid sharp objects and put the Universal Intake

Adapter into the opening

5.Now the Power LED would be ON, if else check the power supply.

6.Introduce the smoke nozzle into the system via the Adapter Cone

9.The system will be ready for leak check in 2 minutes. Use a bright light torch or working lamp to assist

10.After test, press Smoke Control Switch again to stop the unit from generating smoke and

11.Collect the Smoke Hose and the Power Cord with the Velcro Straps for storage. Hang the unit or make it stand in UPRIGHT position only. Do NOT lay it down. 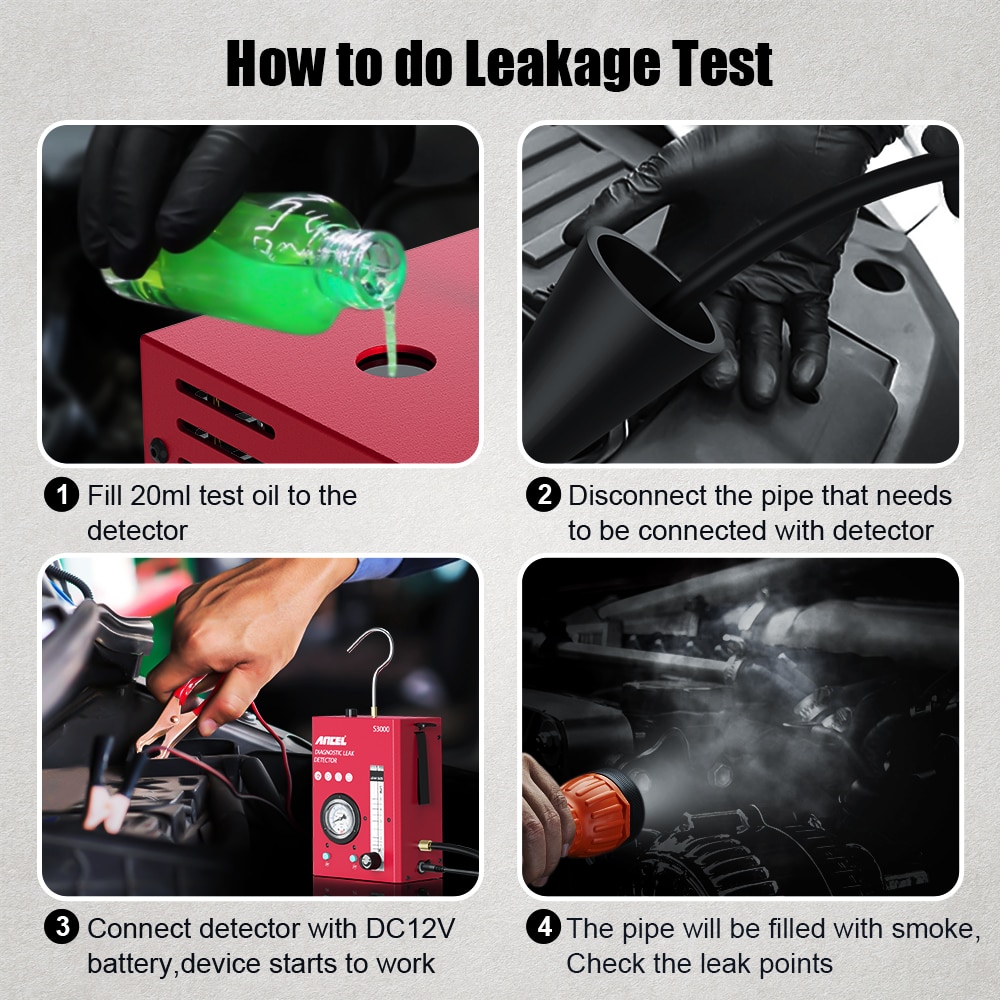 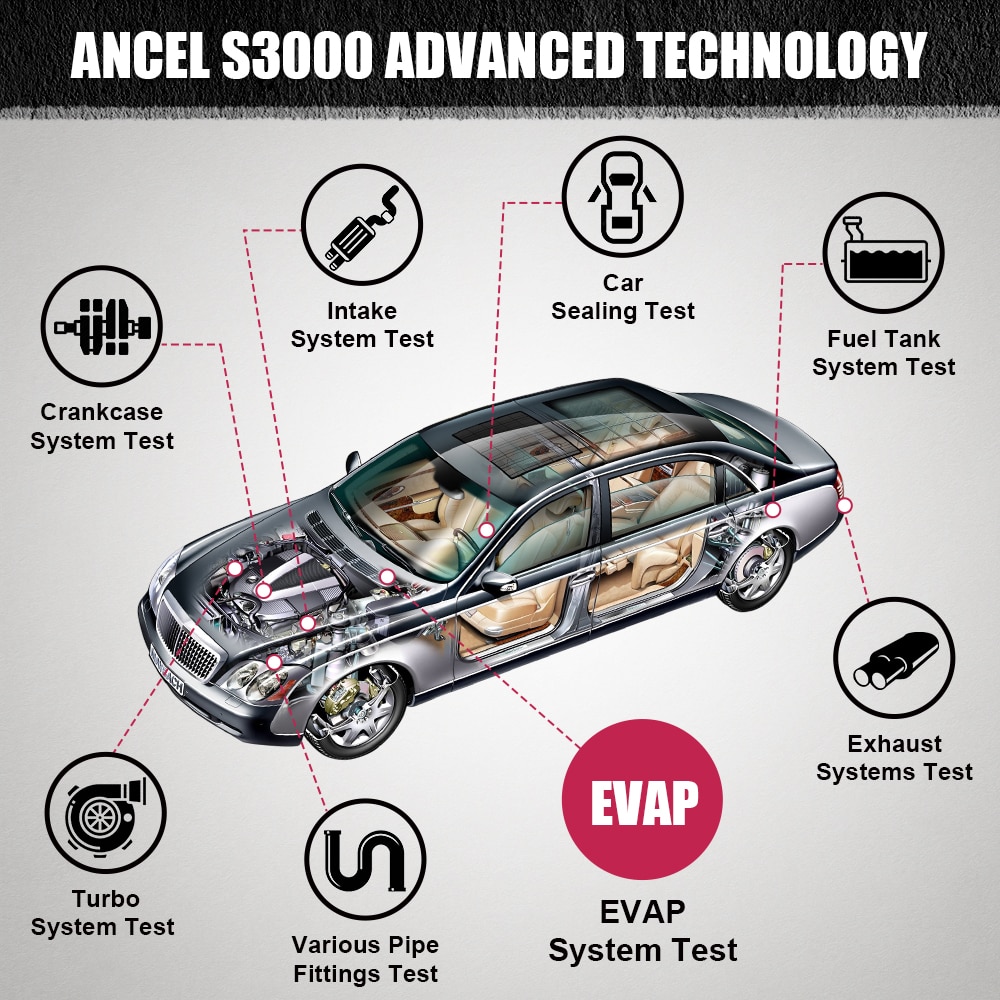 For detecting the leakage of pipe systems on cars,motorcycles,snowmobiles,off-road vehlicles,ATVS,light trucks and speedboats,Suitable for all car models 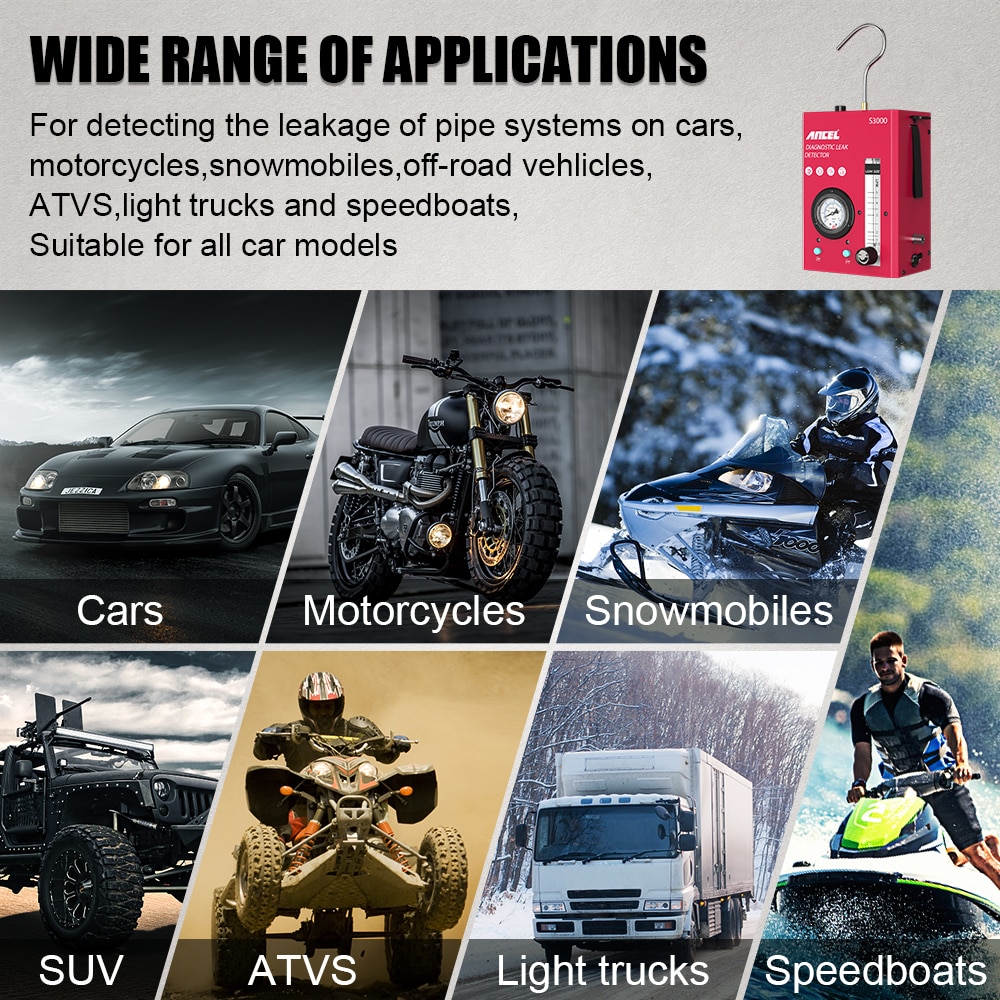 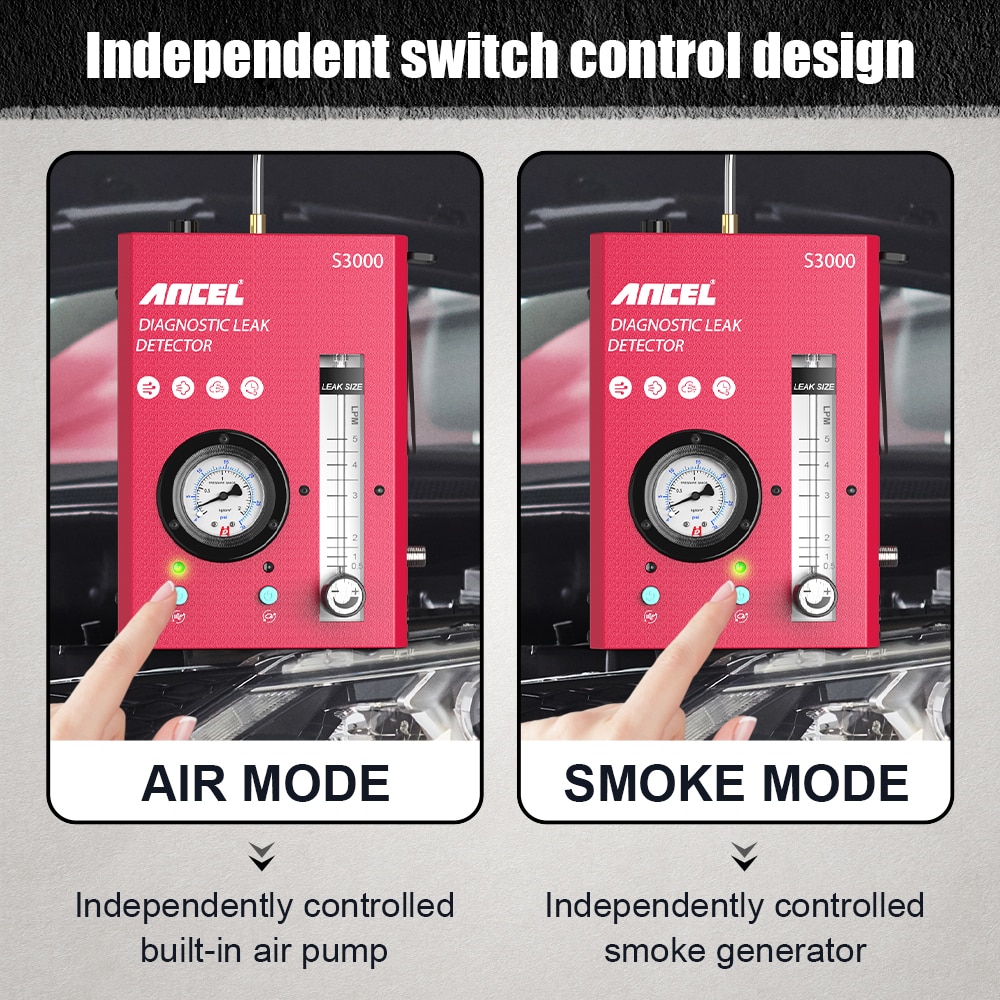 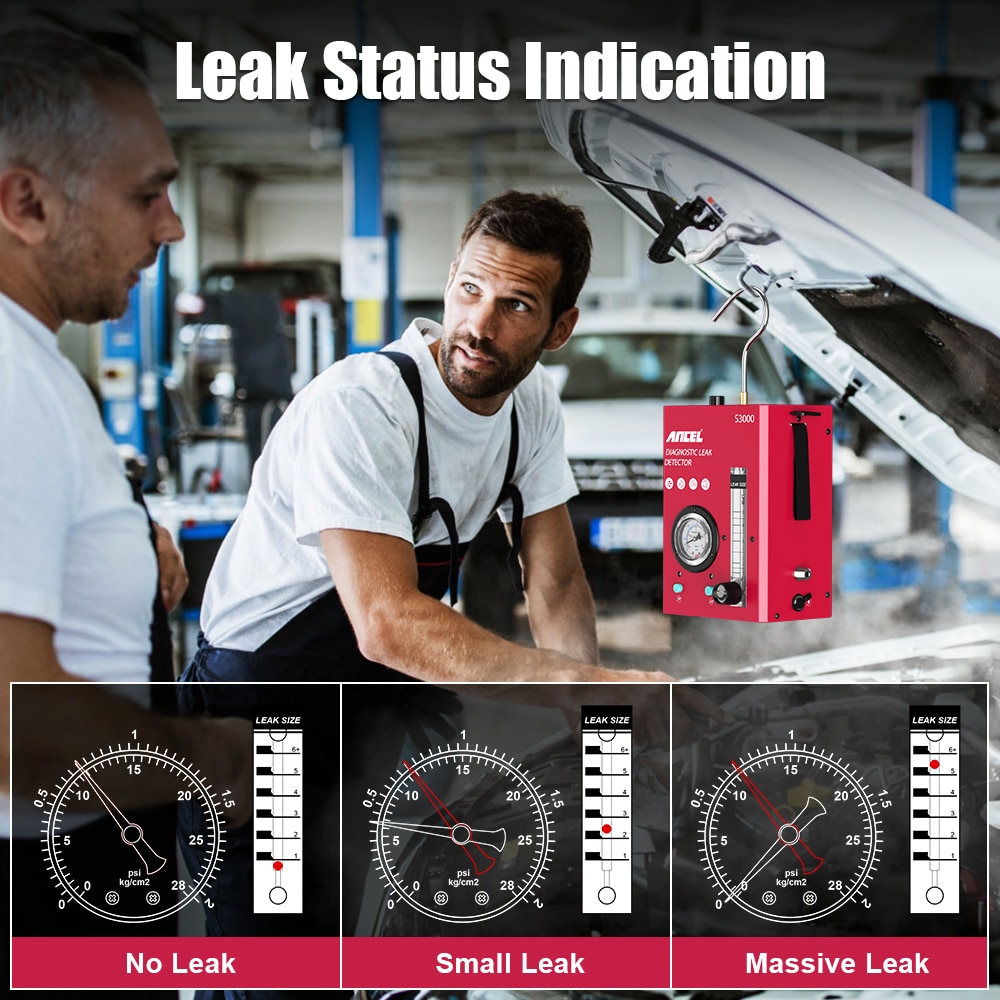 Overheat Protection:When the temperature of the device exceeds 75℃,power protection will be intelligently activated to turn it off. 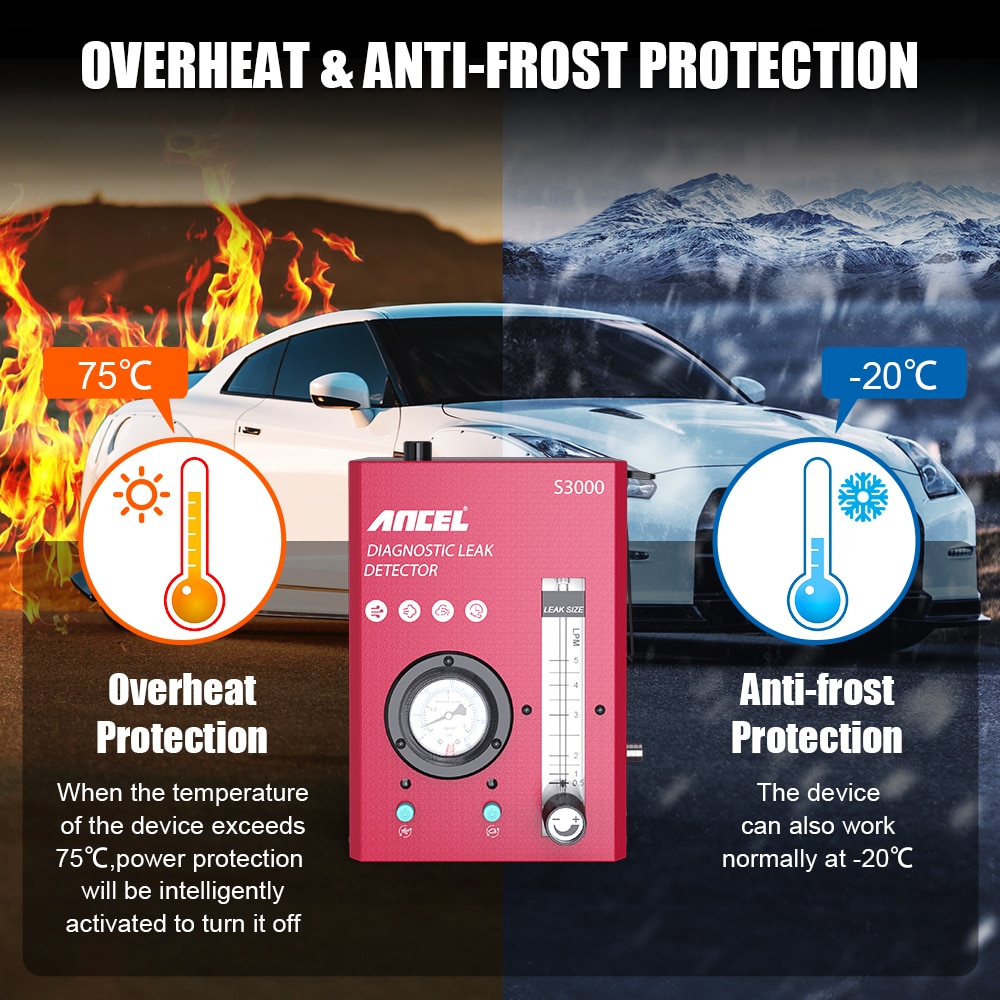 1.When you use this ANCEL S3000 Car Smoke Leak Detector for the first time, fill with 20ml oil . Please be careful NOT to beyond this range.

2.The testing liquid : both liquid paraffin and baby oil are OK.

3.Fresh oil can be filled with only when the smoke gets thin, and it can’t be filled over 20ml each time.

4.Before filling fresh oil, please pour out the left oil in the detector & replace the detector oil regularly.

5.During the process of leak detection, please keep away from smoke-sensitive parts.

6.Do NOT run the detector over 8 minutes continuously. It needs interval rest.

7.The detector has an intelligent protector, if it exceeds the working limit, such as over 75 ℃, it will automatically turn off the power. In this case, please operate it later.

8.The round part of this detector has temperature, please be careful to avoid burns.

9.If the test pipe needs to be disconnected in the middle, please secure the other side with a rubber stopple.

***Oil Refifill Port: For oil refifill while its needed. The funnel is a nice helper to prevent oil from poured to the surface of the unit

***Velcro Strap For collection of the smoke delivery hose, and power cord before storage.

***Power Socket: While set up the unit, the power cords need to plug into the power socket.

***Flow Dial: In many cases excessive smoke existing a leak may make it difficult to determine the exact location of the leak. The purpose of the Flow Control Valve is to decrease the amount of smoke existing a leak so that its position may be pinpointed without the masking effect of excessive smoke. Turn clockwise to decrease flow, counterclockwise to increase flow. This valve is also used to lock out the system under test and observe any pressure decay on the pressure gauge.

***Oil Level Gauge: While set up the unit, smoke oil need to be filled into the unit, do not exceed the MAX line. Check and confirm proper oil level periodically. If the oil level is lower than the MIN line,the unit would need a refill. 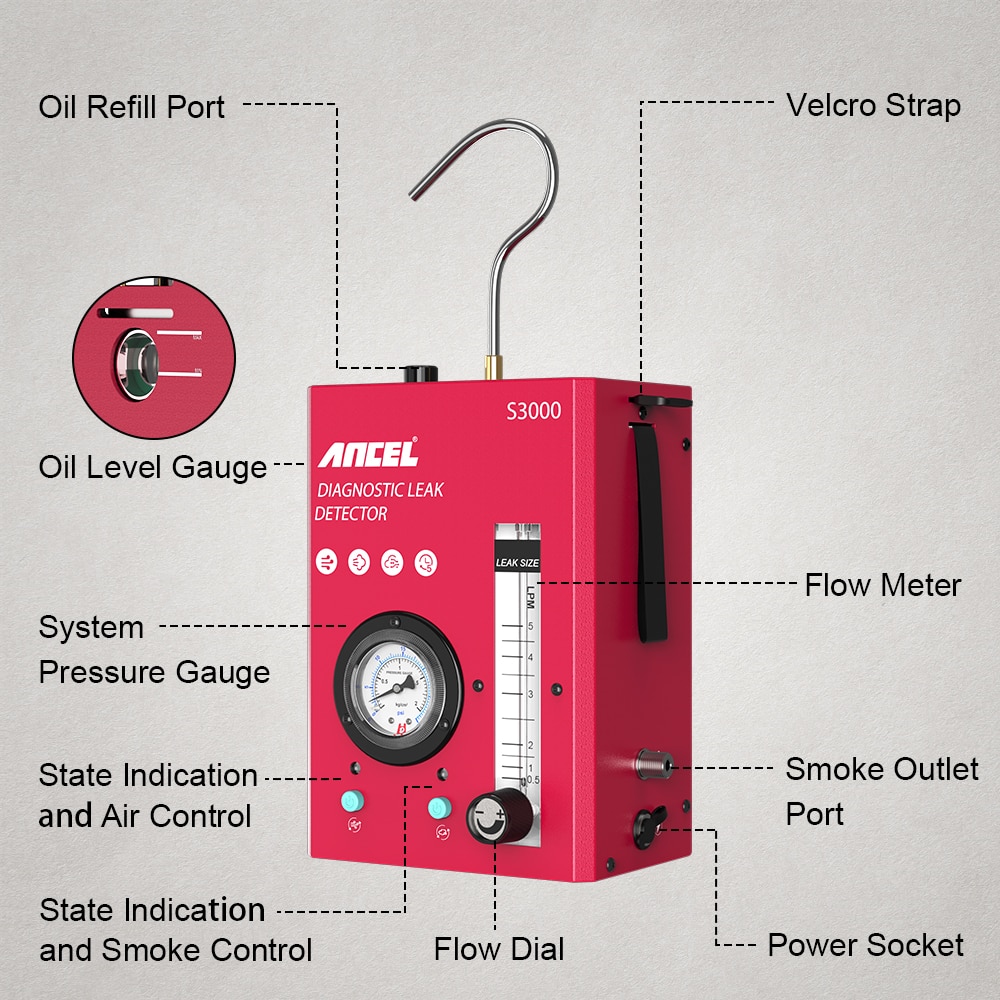 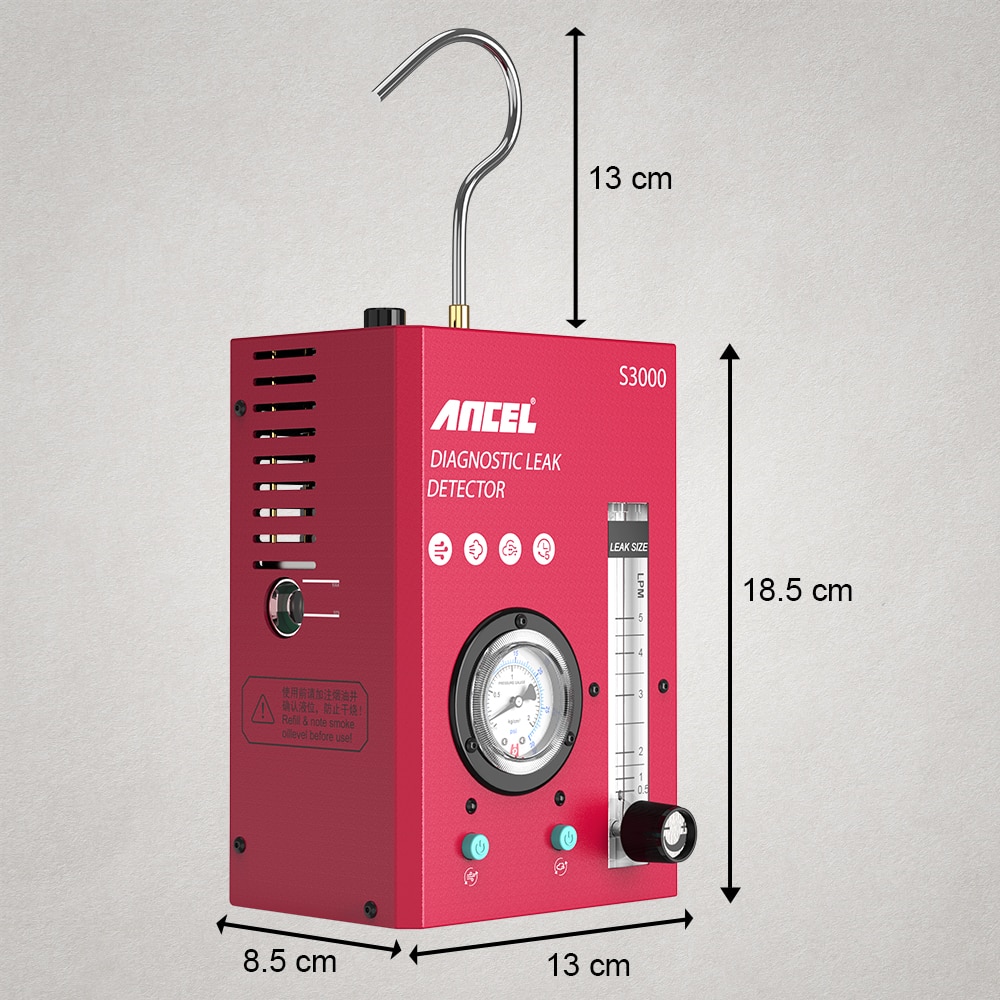 1*Power Cord: To offffer connection from the unit to the automobile battery, in order to drive the unit.

1*Hook up: To hang the somke machine in the car

1*User Manual: Detailed descriptions about how to use the smoke machine automotive.

1*Intake Bladder: To fifit the intake and exhaust, seal the system and introduce smoke into the system. Especially while the inlet position is not rounded-shape.

1*Adapter Cone: To fifit the intake and exhaust, seal the system and introduce smoke into the system. It may fall out at high pressure and need a second hand to push and hold at operation.

1*Replacement Rubber: The rubber on the Intake Bladder may be easily broken, if not operate it properly with caution.The rubber could be replaced with new one without replace the whole Intake Bladder.

1*Smoke Delivery Hose: For introduction of smoke from the unit to Adapter Cone / Universal Intake Bladder or to the vacuum pipe directly. 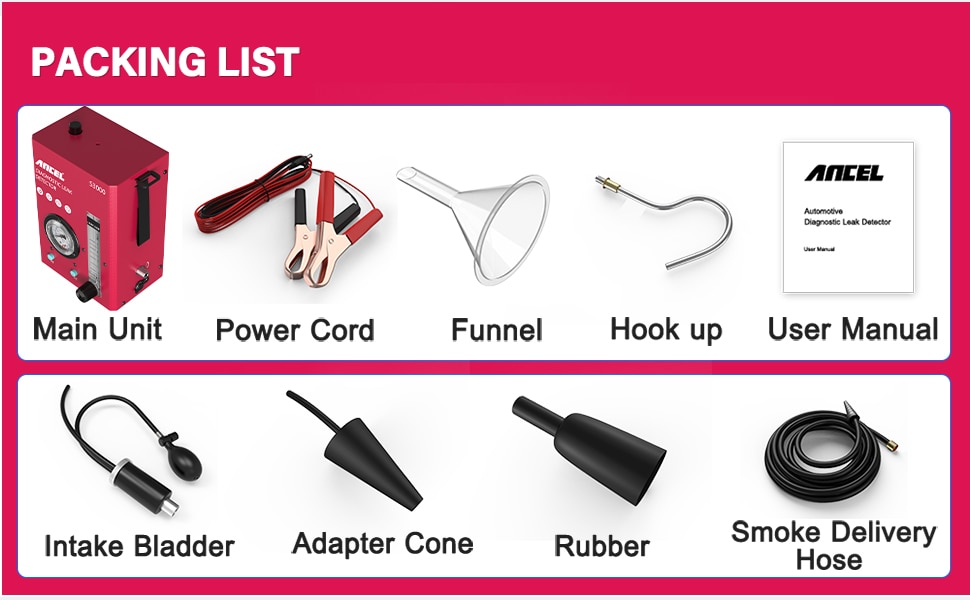 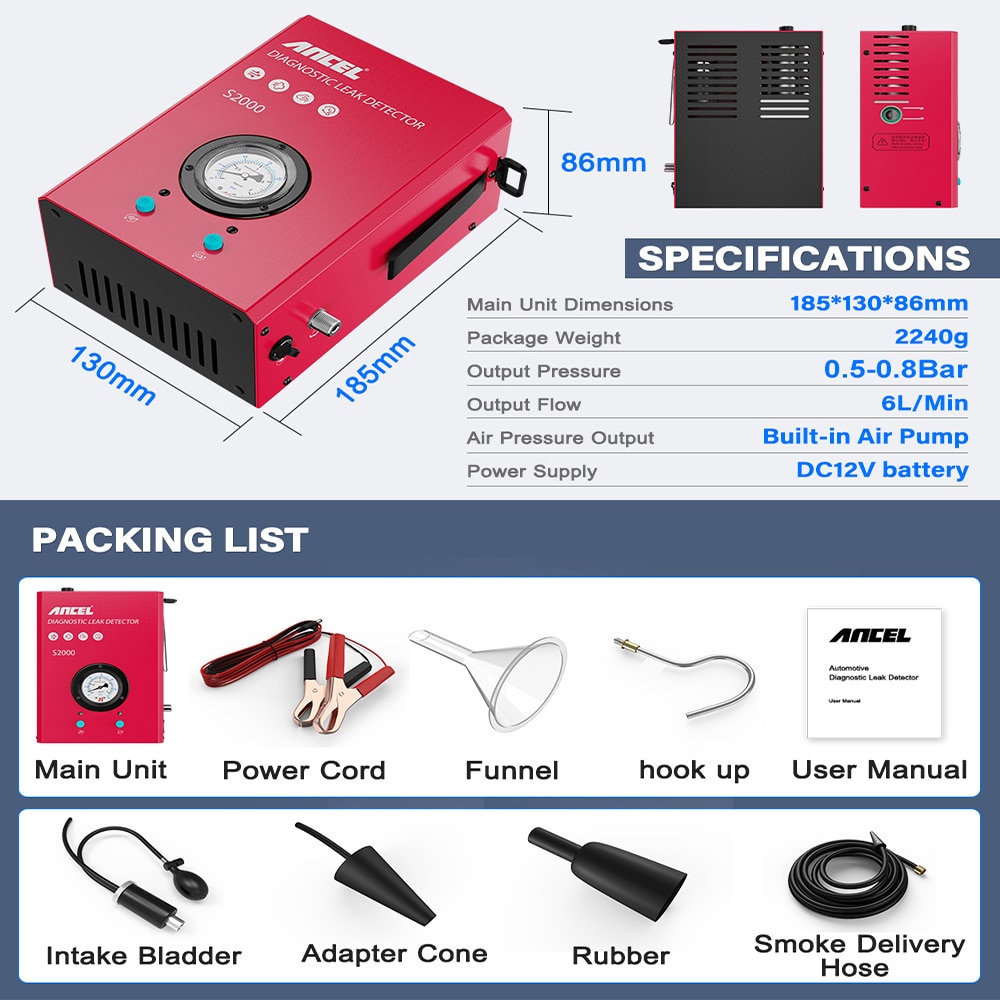 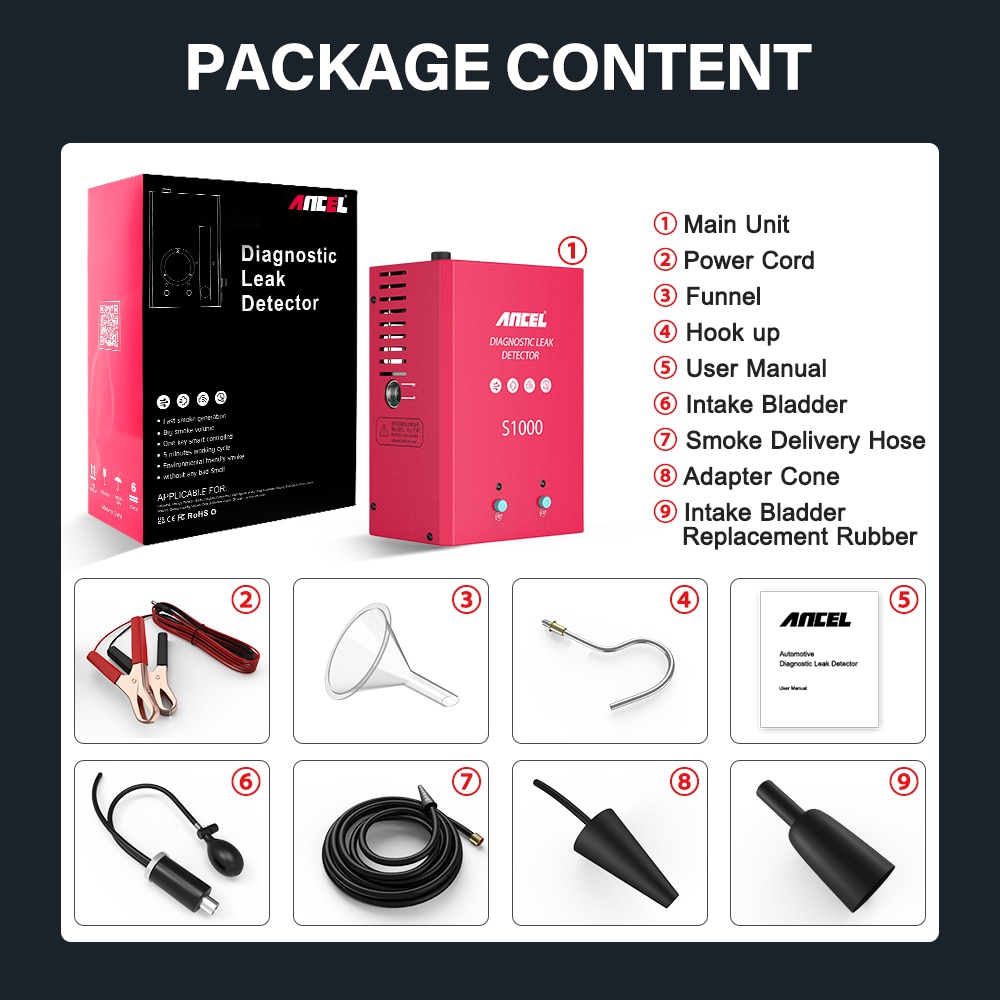 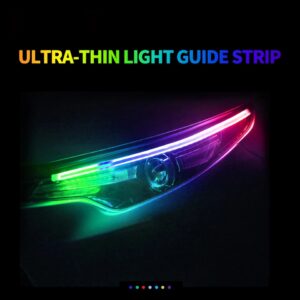